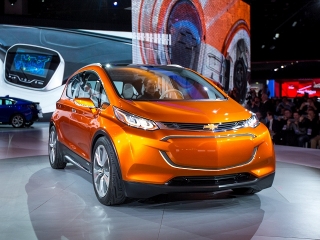 Unveiled at the Detroit Auto Show in January, the Bolt will be built at General Motors’ Orion Assembly plant, 30 miles north of Detroit, which is to receive a $200m (£130m) investment ahead of its as yet unnamed production start date.

As yet it’s unclear whether – as Chevrolet has done with the outgoing Volt – this will lead to a Vauxhall and Opel derivative for Europe.

Opel chief executive Karl-Thomas Neumann said last year that the company was committed to electric vehicles and that the Ampera would be replaced at the end of its life cycle. Its replacement could be based on the next Volt range extender, the fully electric Bolt, or possibly the Spark EV sold in the United States – which shares its platform with the forthcoming Vauxhall Viva and Opel Karl.

Alan Batey, GM's North American president, said: ‘The message from consumers about the Bolt EV concept was clear and unequivocal: Build it. We are moving quickly because of its potential to completely shake up the status quo for electric vehicles.’