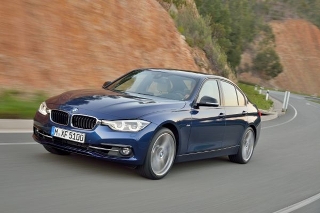 The compact executive car is the brand’s biggest seller, accounting for a quarter of its global sales and with 14 million sold in its 40-year history.

On sale from late summer, the facelifted car is marked out by re-shaped bumpers, LED daytime running lights from the 4 Series Coupe concept, and accents of chrome inside, while new technology includes active cruise control and segment-first 4G LTE high-speed connectivity.

It is also one of the first models to fall in line with the manufacturer’s plans to offer plug-in hybrid drivetrains across the range. Launching in 2016, the 330e combines a 184bhp 2.0-litre turbocharged petrol engine and a 107bhp electric motor, producing a combined 249bhp.

Fully charged, the 330e can travel around 22 miles without using any petrol, helping achieve fuel economy of 134.5mpg and CO2 emissions of 49g/km on the NEDC test for plug-in hybrids. Those figures match the Mercedes-Benz C 350 e, which launched recently.