98% of fleets plan to electrify vehicles

A huge surge in the adoption of hybrid and electric vehicles is on the way among fleets, with the vast majority (98%) looking to electrify vehicles in the next five years. 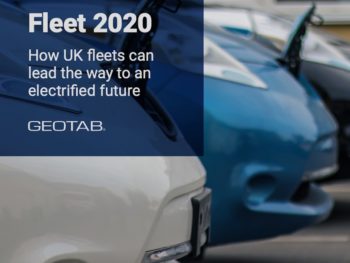 Geotab discovered 78% of fleet managers plan to electrify up to half of their fleets within the next five years and in fact, only 2% of fleets have no plans to implement EVs

The Fleet2020 research also found that 46% of fleet managers expect EVs to play a dominant role in their company’s fleet within the next 1-5 years, while just over half (51%) imagine it will happen between the 5 to 10-year mark.

Reducing the fleet impact on the climate is a key motivator for EV take-up; more than half (54%) of UK fleet managers agree that the main benefit is the reduction in GHG levels and the overall environmental impact. This is closely followed by the management of fuels costs (47%), better total cost of ownership per vehicle (47%), and the reduction of operation, maintenance and upkeep (40%).

There are still some ongoing barriers to adoption among drivers though, including range anxiety; cited by 42% as a top stressor, even though almost all (97%) of UK drivers have daily round-trip commutes of under 100 miles – well below the average 224-mile range of the nation’s top five best-selling EVs.

Furthermore, 36% of drivers are uncertain on where they could charge their electric vehicle, while 63% of all drivers think the UK should be doing more to scale-up infrastructure.

Though it’s considered a concern for UK consumers, a lack of public charging infrastructure is not such a high concern amongst fleet managers, and only cited by 26%. High vehicle cost (32%) is the biggest hindrance to adoption, followed by long charging times (29%) and a lack of availability of medium to heavy EV models (29%).

But a lower purchase price isn’t the primary change that would motivate fleet managers to transition to an EV fleet. Improvement to charging infrastructure (41%), improved OPEX (39%), and a better understanding of benefits (38%) are considered the leading motivators in the UK.

And with recent data from the EEA illustrating the impact of Covid-19 lockdowns on nitrogen dioxide (NO2) emissions, which have fallen 60% in the last few weeks, Geotab said the report highlights an opportunity to take action on global warming.

David Savage, regional manager, UK & Ireland at Geotab, said: “Now is a critical moment for fleet managers and consumers interested in adopting more electric and hybrid vehicles to do so. As the demand for action grows, we must apply all the tools at our disposal to make the change happen and continue to encourage positive, permanent change when things return to normal.”