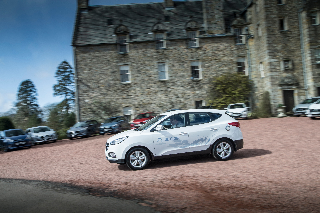 The cars were part-funded by Transport Scotland and will be fuelled using locally-produced hydrogen, offering a range of 326 miles and short filling times with only water vapour from the exhaust.

Promotional events and testing are now underway ahead of making them available on a pay-as-you-go basis later in 2016. Co-Wheels was Scotland’s first car club to run a pilot with electric vehicles, and more recently with hydrogen fuel cell vehicles in 2012, and now has the UK’s largest electric car sharing fleet.

The new additions also complement Aberdeen’s public transport system, which includes Europe’s largest fleet of hydrogen-powered buses, and usage patterns will be used to develop a refuelling infrastructure for the North East and Scotland.

Lead member for hydrogen, Councillor Barney Crockett, said: “Aberdeen is renowned as an energy city and for being keen to drive forward new energy technologies and work with countries across the world to secure its future as an energy leader.

“With these cars, we are taking things to the next level, moving ever closer to becoming a world-leading renewables city and securing a hydrogen economy in Aberdeen, presenting tangible opportunities to the energy industry.”