Arsenal has deployed electric vehicle chargers at its Emirates Stadium, enabling fans to charge during games. 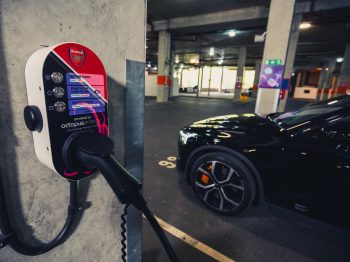 The 7kW chargers, installed in the fan parking zone, will provide 100% renewable electricity to EV drivers during games

The 7kW chargers have been installed by Octopus Energy ahead of this weekend’s match between Arsenal and Brighton.

The chargers, installed in the fan parking zone, will provide 100% renewable electricity.

It’s the latest project by Arsenal and Octopus Energy, which have worked together for five years on green initiatives; the stadium was the first UK Premier League stadium to have a large-scale battery installed, which can store enough green electricity to power the stadium for an entire game. And the stadium has been powered with 100% renewable electricity supplied by Octopus Energy since 2017.

Other eco-focused work by Arsenal includes holding sustainability classes for local children through Arsenal in the Community and planting 500 trees at the club’s London Colney training centre, adding to the 29,000 that have been planted since 1999 to make Colney Wood.

Arsenal defender Hector Bellerin said the club and the players have a role in incentivising more people to go green.

He commented: “Definitely when we have a bigger platform, we have some social responsibility to be positive and raise awareness about different things, environmentally and ethically. Sustainability is not only what happens to the environment but about ethics and being a humanitarian.”

Mike Lloyd, sustainability and logistics manager at Arsenal, said the chargers serve both a practical and an ethical purpose.

He explained: “From a practical point of view, the installation of the chargers is very important to ensure we cater for our fans as EVs become more widely used. As a Premier League football club with a huge global following, it’s also crucial that we use our platform to promote green practices, inspire our communities and push each other towards a more sustainable future. This is just the beginning and hopefully as the numbers of electric vehicles on the roads increase, we can match that with the facilities here at Emirates Stadium.”

Previous: Europe’s most powerful electric vehicle charging hub to open in Oxford
Next: One in four drivers plan on an EV in next five years, finds Ofgem