Audi will launch its first plug-in hybrid A8 saloon early in 2018, a few months after the arrival of the rest of the new-generation range. 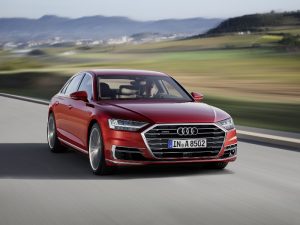 The A8 is Audi’s third plug-in hybrid.

The A8 L e-tron quattro is the brand’s third plug-in hybrid, and will take on similar products from BMW and Mercedes-Benz. Expect it to offer CO2 emissions of around 50g/km in line with its rivals.

It launches shortly after Audi said it expects one in three of its new cars to be plug-ins by 2025, and joins a growing range which will also include three electric vehicles by the end of this decade.

Power comes from a 3.0-litre TFSI petrol engine and electric motor, which can produce a combined 443bhp and sprint to 62mph in 4.9 seconds, or enable the long-wheelbase luxury saloon to travel 31 miles on electricity, at up to 83.9mph.

The lithium-ion battery is beneath the boot floor; it stores 14.1kWh of energy, and can be recharged in two hours on a 7.2kW charging point, as well as wirelessly at half that speed. To conserve fuel, the engine can be decoupled from the transmission at low loads if the driver lifts off the pedal, while satellite navigation data is used to pre-plan how the energy is used during a journey.

Pricing, fuel consumption and CO2 emissions information will be revealed closer to the car’s launch, which for the UK is likely to be in the second quarter of 2018.