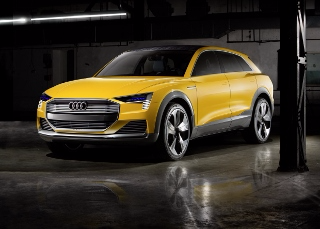 The h-tron quattro concept is a large SUV similar to the e-tron quattro shown at the Frankfurt Motor Show last September, the latter was said to have previewed an electric production car due in 2018 as a rival to the Tesla Model X.

Audi says the two cars share a platform – the same one used by the new A4 and Q7 – and most of the floorpan is unchanged despite the different technologies underneath. Each features electric four-wheel drive using a motor at the front and rear axles.

The h-tron quattro is said to offer a range of 372 miles on a tank of hydrogen, and can be refuelled in four minutes. It also features a compact, high-output lithium-ion battery – mainly charged using recuperated kinetic energy while braking – which can provide a power boost for short periods.

Its fuel cell stack is claimed to deliver over 60% efficiency, and is mounted where the engine would be on a conventionally powered vehicle. Three hydrogen tanks are stowed beneath the passenger and luggage compartment, and don’t impact on interior space.

Audi has yet to confirm whether the production version of the e-tron quattro, rumoured to be called the Q6, will also include a hydrogen fuel cell drivetrain. However, the carmaker said last November that it is in a position to launch a fuel cell vehicle as soon as the market and infrastructure are ready.