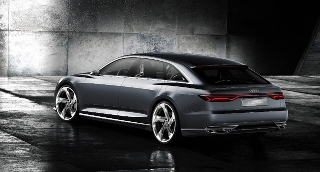 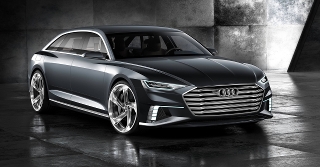 Set to debut at the Geneva Motor Show, the concept builds on the Prologue Coupé concept shown at the LA Auto Show and brings a new interpretation of the Audi Avant philosophy.

With a length of 5.11 metres, a wheelbase of 3.04 metres, a width of 1.97 metres and a height of 1.4 metres, the Audi prologue Avant is a little larger than the two-door coupé Audi prologue. It also features four individual seats, four doors and a large tailgate along with a stretched roof and extremely flat D-pillars.

Under the bonnet, the plug-in hybrid drive of the Audi prologue Avant is almost identical to the powertrain in the Audi Q7 e-tron quattro which will be launched in summer 2015 and uses a 348bhp 3.0 TDI engine with a 100kWh electric motor, giving 449bhp and 553.2lb.ft of torque. It’s also equipped with an eight‑speed tiptronic and quattro permanent all-wheel drive.

The show car accelerates from 0 to 62mph in 5.1 seconds with a top speed limited to 155 mph. The Audi prologue Avant is capable of returning up to 176mpg combined according to the NEDC standard for plug-in hybrid vehicles – corresponding to 43g/km. There’s also a 14.1kWH lithium-ion battery pack in the rear, giving the car a range of 33.6 miles in pure electric drive mode.

With its AWC (Audi wireless charging) technology which Audi is developing for series production, the battery can also be charged inductively.

Other features include dynamic all-wheel-drive steering and “high-end series production chassis technology” for the chassis.