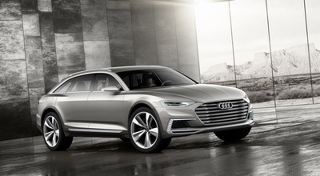 Although the concept is almost identical in length to the A8, the Prologue offers some indication of the design and technology due for Audi’s next-generation cars, notably the new A4 which is due in the near future.

Previously shown as a petrol-powered coupe and diesel plug-in hybrid Avant estate, the version shown in Shanghai is raised 77mm and has extended arches. It features a combination of 4.0-litre TFSI petrol engine with an electric motor in its eight-speed tiptronic gearbox.

This produces a combined 734hp, but with a 14.1kWh on-board battery offering a 33-mile electric range and the ability to charge wirelessly using inductive charging technology. The result is 117mpg on the NEDC test for plug-in hybrids, with CO2 emissions of 56g/km.