Audi to rival BMW i8 with electric R8 supercar 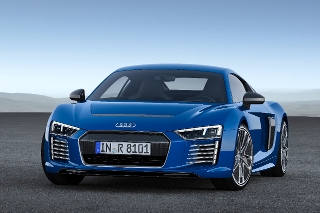 The carmaker had previously tested an e-tron version of the first R8, but decided the price was too high and the range – at 134 miles – was too short for there to be a business case.

Its drivetrain comprises a pair of electric motors producing 456bhp, paired with a lithium-ion battery with a capacity of 92kWh – nearly twice the 49kWh of the first R8 e-tron and almost 10% more than the Tesla Model S.

The battery is T-shaped and located in the centre tunnel, giving a low centre of gravity, and Audi has included the Combined Charging System for DC rapid charging. On the fastest rate, this takes less than two hours to fully charge, due to the large capacity of the battery compared to most electric vehicles.

Customers will be able to order the car later this year, but Audi said its primary function is to test electric drivetrains. This will lead to some sort of plug-in hybrid or electric saloon, likely to be a rival to the Tesla Model S.