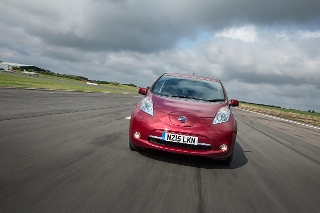 Nissan Motor GB managing director Jim Wright said government schemes to back ultra-low emission vehicles over the last 18 months had been positive, particularly the investment in its own fleet, and consistency of the Plug-in Car Grant, but added that stability was needed to encourage fleets.

“We’ve said you need to give [support for infrastructure] to companies as well, so they can put infrastructure on their own premises so people can charge when they get into work – it’s not just about domestic charging,” he said.

“I think there are other things which are not financial. If you look at Norway, yes there was a financial incentive but one of the big incentives was driving in the bus lanes in Oslo if you have an EV. We’re saying you have to look at these things – EV penetration in London would go through the roof in London if you could drive in bus lanes. It’s getting there, but there are more things that they can do to seed the market, which don’t necessarily cost money.”

Four yours into the LEAF’s life cycle, and with usage now becoming ‘normalised’ on fleets, Nissan has added a higher capacity battery as a £1,600 option on the mid and top trim levels, boosting the range to 152 miles without any features being lost elsewhere. It’s expected that this will be the more popular version, particularly as it carries an eight-year, 100,000-mile warranty instead of the five-year, 60,000-mile equivalent on the battery offered to date.

“Probably a year ago we were selling ones and twos, occasionally we were selling ten,” he said. “Uptake in fleet is still less than retail but we’re getting 20s and 30s. The businesses that have taken ones and twos are coming back for more, businesses which have had LEAFs are taking e-NV200s, and businesses who have e-NV200 are buying LEAFs. So slowly you can see the ripple effect starting to wash out.”

The carmaker is also using the LEAF’s high customer satisfaction to its advantage, getting existing customers to advocate electromobility to others through videos and live interactions at Goodwood Festival of Speed earlier this summer.

“We’re doing this in fleet as well,” Wright added. “We get customers to share their experiences through video, and the field team can go around and show certain business types. For example, we’ve been relay successful with a number of taxi fleets, and if you can demo to one bus type that another has made a success of it then it becomes an easier sell.”