By Jonathan Musk / 10 months ago / New Cars / No Comments

With an increase from two to five models featuring innovative plug-in hybrid drive by November 2020, the new BMW 5 Series offers the largest range of PHEVs within one BMW Group model series. 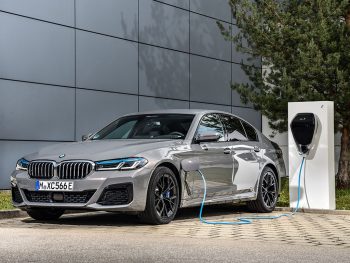 Despite its performance, the 545e xDrive emits between 49-54g/km CO2 and its fuel consumption is rated as being between 98-112mpg, combined

The BMW 530e plug-in hybrid models are both powered by a four-cylinder petrol engine combined with an electric motor, driving the wheels via its gearbox, the saloon variant of which was released earlier this year in June. Joining the models, is the new 530e Touring due for release in November.

Next in line is the new BMW 545e xDrive Saloon, which features a 109hp electric motor combined with a straight-six turbo petrol engine producing 286hp. System output is 394hp, which is sent to all four wheels via the eight-speed automatic gearbox. Performance is brisk, with 0-62mph taking 4.7 seconds onto a top speed of 155mph.

Despite its performance, the 545e xDrive emits between 49-54g/km CO2 and its fuel consumption is rated as being between 98-112mpg, combined.

The BMW eDrive Zone service facilitates the automatic switching over of the drive system to purely electric mode when entering an urban low-emission zone and similar inner-city areas. In addition, local emission-free driving with a BMW plug-in hybrid model is rewarded through the globally unique loyalty programme BMW Points.

The five plug-in hybrid 5 Series models are therefore the 530e, 530e xDrive, 530e Touring and 530e xDrive Touring, as well as the newly introduced 545e xDrive. The latter is not yet slated to have a Touring version offered.

The car’s details arrive as BMW reveals its ten-year plan for sustainability, underscoring its commitment to goals announced at the Paris climate agreement. BMW and MINI brands together already account for around 8% of all European plug-in car sales, which the company expects to rise to around 15% by 2021, and to 33% by 2025 and to 50% by 2030.