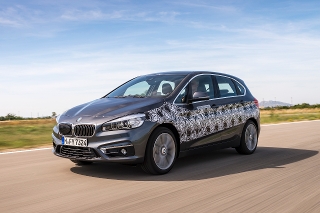 It’s the production reality of BMW’s Concept Active Tourer, which previewed its first MPV back in 2012, shown in almost showroom-ready form this week. Based on knowledge from the i sub-brand, BMW is planning to offer plug-in versions of all of its mainstream models.

The 2 Series Active Tourer's drivetrain is essentially a lower-powered version of the i8 supercar's, but in reverse. There’s a 1.5-litre, 134bhp three-cylinder turbocharged petrol engine driving the front wheels and connected to a generator which can charge the battery. At the rear axle is a 87bhp electric motor.

BMW is claiming it will reach 62mph in around 6.5 seconds, while the 23 mile electric range enables the car to return 141mpg and emit less than 50g/km CO2.

There is no loss of luggage space as a result of the battery, and the charging port – a Type 2 AC connection – is under a flap on the front wing. It’s unlikely that this will offer rapid charging.

The 2 Series Active Tourer with eDrive will join the range in the near future, and BMW has suggested pricing will be close to similarly-powered petrol and diesel models. This would suggest it would start at around £32,000 in the UK, the same as the 225i Active Tourer.