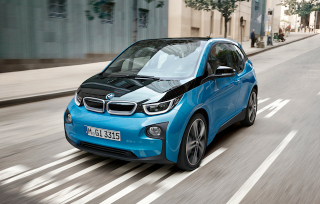 The refreshed i3 features a new 33kWh lithium-ion battery, slightly larger than the unit fitted to the latest Nissan LEAF and a significant increase on the 22kWh unit fitted since the car launched in 2013. It’s offered with the same 168bhp electric motor and with or without a range-extending petrol engine.

Fully electric versions can travel up to 195 miles, depending on wheel choice, using only battery power, compared to 118 miles for the outgoing model. BMW says this equates to 125 miles in everyday driving, instead of 80 miles for the 21kWh battery. Range-extender versions add 81 miles using a small petrol engine as a generator.

The new battery fits into the same space as the unit it replaces, and existing customers in selected markets will be able to have the new battery pack retrofitted to their 22kWh i3 – there are no plans to offer this in the UK. Used battery packs will be recycled as energy storage units.

Increasing the battery capacity does result in slightly slower charging times. A full charge at 3.7kW – typical of home wallboxes – takes seven and a half hours instead of five and a half.

DC Rapid Charging is now standard equipment, and restores 80% of the range in 39 minutes (instead of 25 minutes), and the new on-board charger is also compatible with 11kW charging units. This, and the larger battery, increases the electric version by 40kg, and the range-extender by 25kg.

The refreshed i3 is available in the UK from July, priced at £27,830 for the fully electric version and £30,980 for the Range Extender, each including the £4,500 Plug-in Car Grant. Range Extender i3s are the only ultra-low emission vehicle with a petrol engine to qualify for the full grant.