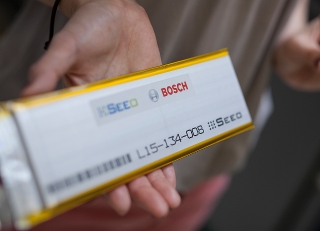 Bosch is working on a new solid-state battery technology which it says could double the electric range of plug-in and battery-electric vehicles within five years without an increase in size.

Traditionally, lithium-ion battery cells have been limited by the high graphite content of the anode (the negative pole). In a solid state battery, the anode can be made out of pure lithium, and doesn’t require ionic liquid – so the cell is not flammable.

Having recently acquired U.S. technology startup, Seeo, the company has a team of specialists and sample cells which it says have the potential to meet the safety and durability requirements of production.

It’s said that solid state batteries could offer twice the range of an equivalent size and weight lithium-ion battery – for example doubling a new Nissan LEAF’s 152-mile range to over 300 miles. Bosch estimates that a third of all new cars in Europe will have be either fully electric or plug-in hybrids by 2025 – mostly the latter.

Dr. Volkmar Denner, the chairman of the board of management of Robert Bosch GmbH, said: “Solid-state cells could be a breakthrough technology. Disruptive start-up technology is meeting the broad systems knowledge and financial resources of a multinational company.”