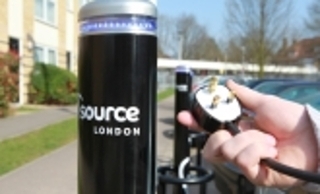 The organisation analysed data obtained under the Freedom of Information Act from Transport for London, which operated the Source London network of electric charging points until last September.

The analysis also shows that 80% of all charging takes place in inner London even though only 46% of the charging network is in this area.

Professor Stephen Glaister, director of the RAC Foundation, said: ‘The Mayor of London has committed to rolling out another 4,500 charging points over the next three years, on the way to meeting his ultimate target of 25,000, yet official data shows the bulk of the units we already have are significantly underused.

‘One reason for this could be the large number of units that appear broken. The Source London website suggests around a third of charge points are out of service, so you couldn’t charge your car from them even if you wanted to. Before we splurge money on more units we must ensure the existing network is fully operational and accessible.

‘Hopefully our analysis will give an indication of where further money should be spent and where extra infrastructure might be needed.’