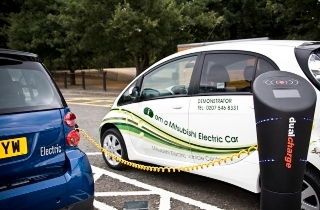 The company, which reached the milestone of one million charges on its national network earlier this year, is offering fleet customers at the Show an all-inclusive offer on its Business Charging unit, enabling fleet drivers to charge easily and efficiently at work. The workplace charging points units can either be purchased or leased from Chargemaster.

Alongside this offer, Chargemaster will also be giving customers attending the Show the chance to win a weekend with a BMW i3 – the UK Car of the Year 2014. The lucky winner will also have access to Chargemaster’s nationwide network, which includes around 4,000 public charging points.

Since September 2012, Chargemaster has supplied more than 9.5 million kWh of energy to electric vehicles – enough for an electric car to drive around 49 million miles! The growth in plug-in vehicle numbers in the UK has been supported by Chargemaster’s growing network of charging points. While it took two years for the company to reach its first 500,000 charges, it took just six months for it to achieve the next 500,000.

James Jean-Louis, commercial director of Chargemaster, said: “As the UK’s electric vehicle population continues to grow – quadrupling in the past year alone – we are ensuring that our network supports both private and business drivers. We look forward to showing off all of our latest infrastructure at The Fleet Show, including our dedicated workplace charging point, which will be offered to visitors for an all-inclusive price of £995 on 12 May.”