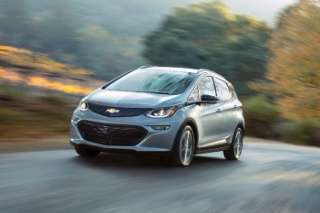 This includes information about the performance available. The Bolt will produce 197bhp and 266 lb.ft of torque from its electric motor, enabling it to out-pace the BMW i3 to 60mph – said to take less than seven seconds from rest. Brake regeneration can also be adjusted, to offer single-pedal driving.

The LG Electronics-supplied battery features a capacity of 60kWh, which is twice that of the latest Nissan LEAF and not far off the entry-level Tesla Model S 70kWh. It features a nickel-rich lithium-ion chemistry, claimed to require a smaller active cooling system and maintain peak performance in different climates and different driving styles.

Chevrolet has equipped the Bolt with a 7.2kW on-board charger, which means it can recharge at twice the speed of the Volt on compatible charging points. It also features the Combined Charging Standard connector for DC charging, replenishing 80% of the range in an hour due to the size of the battery. Up to 90 miles can be added in half an hour, which is the same as most other electric vehicles on a rapid charge.

General Motors has yet to confirm whether the Bolt will be sold under its Opel and Vauxhall brands in Europe, but has hinted that it will launch another electric vehicle in the region in the near future.