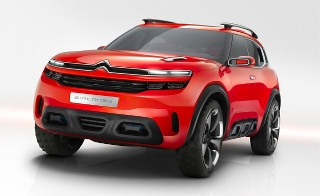 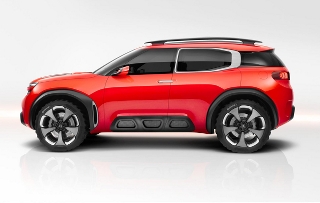 The brand said the model confirms its ability to develop its new positioning and illustrates its international ambitions, building on the success of the C4 Cactus, with a body style intended for worldwide sale.

The carmaker also hinted at how the crossover concept could be used to influence other model styles saying that it “illustrates Citroën’s ability to assert its identity in all vehicle segments”.

The concept brings in C4 Cactus elements including the ‘Alloy Bumps’ and ‘Air Signs’ motifs as well as vibrant orange-red paintwork.

The Citroën Aircross is powered by plug-in hybrid petrol technology, using a 218bhp 1.6 THP petrol engine with a 95bhp electric motor located on the rear axle.

The motor is powered by lithium-ion batteries that charge up in three and a half hours via a 16A domestic socket.

The Citroën Aircross concept car will be unveiled at the Shanghai Motor Show later this month, with Citroën saying the venue was chosen to reflect the importance of the Chinese market, which accounts for 25% of total sales and stands as Citroën’s number-one market.