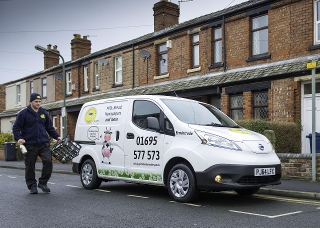 Grimshaw Lane Dairy in Ormskirk has taken delivery of four e-NV200 vans from Crosby Park Nissan in Liverpool and is using them to make its daily deliveries to homes and businesses in and around the town.

The four vehicles each cover around 50 miles a day, making roughly 500 deliveries apiece.

Managing director Andrew Brown, who plans to swap his two remaining diesel vehicles with e-NV200s in the coming months, says the electric vehicles are already saving £900 a month in fuel bills.

'Switching to the Nissan e-NV200 was a no brainer for us,' Brown said. 'Basically the savings we’re making on the fuel have paid for the contract hire on the vans and we’ll be saving on the maintenance too. We’ve effectively got four new vans for what we’d have been spending on fuel.'

Residential customers also benefit as the home deliveries, which start at 1.30am, are now made in near silence. The model's two sliding side doors offer easy cross-cab access, making them ideal for multi-drop delivery operations.

On-board features include the ability to defrost the vehicles from an app before the start of a shift.

According to Nissan, the e-NV200 costs two pence per mile to run and users also benefit from low maintenance costs that make for improved total cost of ownership – £1,200 lower than a conventional diesel van over four years.