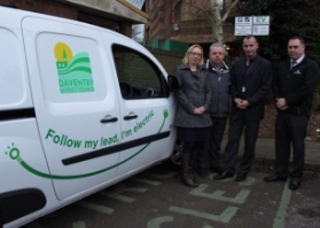 The new vehicle has a range of about 100 miles, making it suitable for the trips around the district that it will be making. It has been bought following a successful trial held in February last year.

The petrol van was driven about 10,000 miles per year and based on that figure it is estimated that the new electric vehicle will allow the Council to make a carbon saving of about 1.8 tonnes a year, as well as improving local air quality.

The Council benefited from a £5,000 Government Plug-In Grant, bringing the cost of the vehicle down to £13,588 and, over four years, it is estimated it will be more than £2,500 cheaper to run than a diesel-powered equivalent.

‘This Council is always looking for ways to further reduce our carbon footprint so we saw this as a great opportunity. We also hope it inspires others, particularly local businesses, to look into the possibility of using electric vehicles,’ explained councillor Daniel Cribbin, environment portfolio holder at Daventry District Council.

‘If it proves a success we will look to replace more of the Council’s vehicles with electric models. We’re also exploring the possibility of having an electric pool car for staff and increasing the number of electric vehicle charge points in the district.’

The move follows the installation of Daventry District’s first free public charging point for electric vehicles in the Lodge Road car park at the council offices in May 2013.

Sponsored by Woodford Halse firm Great Central Plastics, it allows owners of electric cars to recharge their vehicle for free for up to four hours in a designated parking bay.

Previous: Kia to showcase electric four-wheel drive system
Next: Tesla on course for full UK supercharger coverage by end of 2015