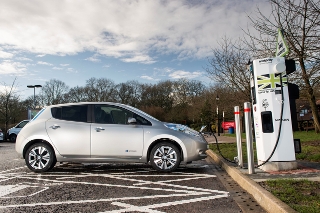 Dale Vince, founder of Ecotricity and the Electric Highway, said the next major focus for the network is on strategic A road, in particular for areas not covered by the motorway network, eg in Wales (A55) and the south west (A30), leading all the way down to Land's End.

He also said that other plans include looking at Scotland up to John O’Groats as well, though he admitted that this will take a little longer.

The move follows the recent charger installation at Liverpool Airport, with Birmingham Airport to follow by the end of this month.

Other key focuses include a continued move to double up at key locations to meet demand and installing CCS (Combined Charging System) units too.

Vince added: “In February this year we delivered one million zero emission miles to Electric Highway members. The first million miles took nearly two years, so that’s quite a step change. Before this year ends we expect to be delivering two million miles a month – that’s a great reflection of the progress EVs are making in Britain.”