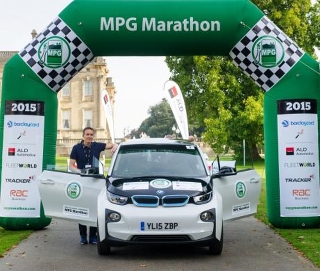 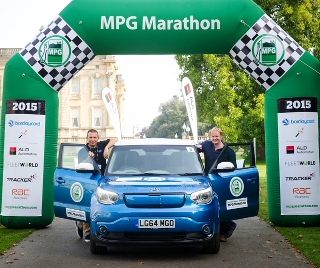 Following their introduction to the event last year, two electric vehicles took part this year in the UK’s leading eco-driving challenge which was sponsored for the first time by Barclaycard Fuel+ in association with TMC.

The electric vehicles taking part attempted the same two-day course as the line-up of conventionally-powered diesel and petrol cars and light commercial vehicles.

Like their competition, they had to stop at set checkpoints en route, which meant that careful route planning was essential to avoid range anxiety and ensure they had enough power to complete the course.

The results were certainly impressive. Jerry Clist (image 1), maintenance controller at ALD Automotive, behind the wheel of a BMW i3 range extender automatic, covered 408.24 miles using 78.19kilowatt-hours of electricity and only 3.04 litres of petrol – an overall energy consumption equivalent to 105.6kWh.

This compared very favourably to the 5p per mile achieved by the overall winners of the event, Mick Linford and Jemma Champion, who clocked up 104.50 mpg overall in a Peugeot 208 Active Blue HDi.

However, with the equivalent of 11kWh of energy in one litre of diesel, the i3’s overall energy consumption measured in terms of litres of diesel for comparison purposes with the Peugeot, meant that it returned the equivalent of an astonishing 193.4mpg.

In the other EV, a Kia Soul, were Sam Young and Chris Lilly (image 2) representing the Next Green Car website. They completed the course in a total of 370.96 miles and used 139.7kWh of electricity, which equated to an energy cost of £19.56 over the two days – the equivalent of 5p per mile.

Again for comparison purposes with the overall winners, the Soul’s overall energy consumption measured in terms of litres of diesel meant that it returned the equivalent of 132.8mpg. As with the i3, the Soul was able to use public charging points which in many cases provide the electricity free of charge.

Organiser Jerry Ramsdale, publishing director of Fleet World who was presiding over the 15th MPG Marathon to date, confirmed that next year’s event would take place in September 2016, and said that the success of the electric vehicles taking part had fully vindicated their inclusion again this year.

“With the spotlight currently on diesel exhaust emissions and mounting pressure on air quality, the performance of the EVs this year is certainly highly significant. And it’s quite clear from this year’s results that historical issues for electric vehicles, such as range anxiety and lack of recharging infrastructure, are a thing of the past.

“The EVs taking part comfortably completed the same course, in a roughly similar time, without any worries over recharging and without any range anxiety for the drivers.”

This year’s MPG Marathon comprised a combined total of approximately 380 miles across the Oxfordshire/ Wiltshire/ Hampshire countryside. Contestants were free to plan their own routes, provided they included a number of pre-agreed, fixed points, which made keen navigational skills essential.

All participating vehicles were again fitted with TRACKER tracking equipment so that event organisers knew exactly where each car was and how far it had travelled.

Behind the scenes, RAC Business kept the MPG Marathon on the move, overseeing fuelling at the start of the event and refuelling at the end, utilising specialised equipment to ensure that the fuel tanks were filled to exactly the same level as before.

For more details of the MPG Marathon, please visit the event website at http://www.thempgmarathon.co.uk/