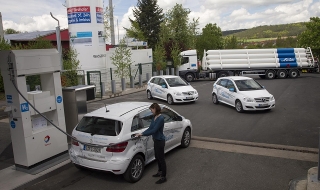 Located at the Geiselwind truck stop, on the A3 between Würzburg and Nuremberg in Southern Germany, the €250,000 (£180,000) site is a collaborative installation between Daimler, Linde and Total.

The 18th hydrogen station in Germany, of which seven are operated by Linde, it’s the first of part hydrogen network which will include around 50 sites, 20 of which will be part of the Daimler-Linde partnership.

German truck stops are accessible from both sides of the road and on local routes, reducing the size of the investment needed for the sites to be deployed nationwide.