Work to accelerate the switch to electric vehicles in the UK and globally continues to gather pace with the news that vehicle leasing giants Lex Autolease and Zenith have signed up to the EV100 global initiative – although concerns over a lack of EV supplies continue to mount. 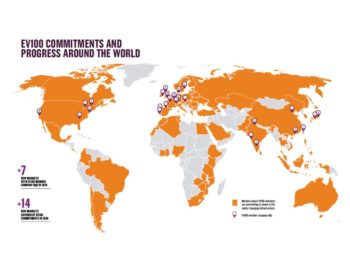 Global businesses are charging ahead on EVs, but cite a lack of supply from automakers as the top barrier to switching their fleet

As part of its pledge, Lex – the UK’s largest vehicle leasing company – has committed to achieving net zero emissions across its customer fleet of approximately 350,000 vehicles by 2030. Its parent company Lloyds Banking Group will also convert its own commercial fleet of 4,000 vehicles to electric and will continue work already underway to install charging points in all staff car parks by 2030.

The scheme furthers existing work among the business to cut emissions, including its  EV1000 fund, which went live in January 2019, providing £1,000 towards the cost of the first 1,000 pure electric vehicles leased through the business. Aided by this, Lex now has more than 21,000 ULEVs on its fleet and says one in 16 EVs on the UK’s roads is a Lex Autolease vehicle.

Meanwhile, Leeds-based Zenith – the UK’s largest independent vehicle leasing company –  has pledged to switch its own inhouse fleet to 100% EV by 2025 – five years ahead of the target date required by EV100.

Already, the firm’s switch to a battery-electric inhouse fleet saved 1.32m kg of CO2 in 2019, on the way to an annual estimated saving of 6.9m kg CO2 by 2021. The company is also addressing broader environmental targets to reduce employee net CO2 footprints and is working with customers’ sustainability and environmental managers.

Chief executive Tim Buchan said: “We believe leasing companies have a pivotal role to play in delivering meaningful and successful EV strategies and policies. The wide-ranging and complex challenges faced by fleet and infrastructure requires corporate leadership underpinned with data – Zenith believes EV100 is the platform to deliver this.”

The announcements coincide with the launch of EV100’s 2020 Progress and Insights Annual Report, which shows demand for electric vehicles is on the up and that members are progressing fast towards their goals where models are available; some 80,000 EVs have already been deployed and over 10,000 charge points installed to date.

However, the report finds the slow roll-out of electric vehicles from the auto industry is the top barrier for members when it comes to switching their entire fleet, as cited by 79% of respondents – up by a third from last year.

As such, with corporate ambition on EVs shifting up a gear, EV100 members say the auto industry is not responding fast enough for supply to match demand.

And The Climate Group has added that that while the European EV market is expected to grow in response to tough EU emissions rules, the US in particular risks being left behind globally – with the right for State level leadership on vehicle emissions standards being fought out in the courts later this year.

Helen Clarkson, CEO, The Climate Group, said: “For years automakers have raised the lack of demand as a problem for moving faster on electric vehicles. Our report shows that big business demand for EVs is increasing but is still not being met by manufacturers. If automakers want to stay competitive, they need to shift to a higher gear on producing EVs – or risk losing their largest customers.”