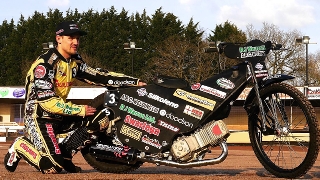 The speedway ‘time challenge’ is being organised by Prestige Fleet Servicing, and visitors will be able to put their starting reactions to the test on a real speedway bike linked to a simulator, against those of a professional speedway rider from the Revolution Speedway team.

The time challenge is one of a number of attractions at this year’s Fleet Show at Silverstone on Tuesday 12 May, which is being sponsored by Barclaycard Fuel + in association with TMC, and which has already attracted record numbers of pre-registered visitors.

Joe Bhamra, commercial director at Prestige Fleet Servicing, said that the time challenge had proved popular at other events, and that the fleet visitor with the fastest start time would receive two hospitality tickets to an elite speedway event of their choice at a variety of locations around the UK. The company is also holding a free prize draw to win a new Apple iPad on its stand

The time challenge is carried out on 2015 speedway bike in full race specification, powered by a 500cc single cylinder engine that runs on methanol and with an acceleration to match that of a Formula One racing car.

“Attempts are unlimited during the day and we find customers revisit the stand to check where they are in the league table and inevitably have another go at pitting their reaction times against our trained professional rider,” said Joe Bhamra.

The speedway time challenge is one of a number of attractions at this year’s show which has a record number of exhibitors, up 73% on last year, including record numbers of both vehicle manufacturers and fleet service companies.

For example, the final of the ALD Automotive Fleet Driver of the Year will again be held at the Show, when ten finalists will be putting their driving skills to the ultimate test.

At stake is not only the coveted Fleet Driver of the Year title, won last year by Philip Palmer, Territory Sales Manager at Worldpay, but a host of other prizes including a pair of tickets for this year’s Formula One Grand Prix at Silverstone for the winner and two runners-up, and a hot lap in a 5.0-Litre V8 Lexus RC F around the International Circuit at Silverstone for the winner.

The 10 finalists will face a set of practical driving tests to thoroughly examine their driving skills under the watchful eyes of AA DriveTech‘s specialist driver trainers.

And all the final driving tests will be carried out in a specially provided fleet of Toyota cars which will give the finalists the opportunity to experience their fuel economy and handling capabilities.

This year’s record-breaking Fleet Show promises to provide something for everyone with a wide variety of activities of real interest.

These include the highly successful interactive fleet training sessions first introduced last year, run by practising fleet managers and ideal for anyone wanting to find out something new in fleet management.

Test driving will again be a major focus of the event, with three circuits of the world-famous Silverstone Grand Prix venue available, plus off-road driving on the 4×4 course.

A record number of vehicle manufacturers are attending this year’s event with 26 individual brands being represented. There will be a special emphasis on alternative powertrains, including electric and hybrid powered vehicles, which looks set to be a major attraction for fleet decision-makers.

This area will also provide Show visitors with the chance to hold face-to-face meetings and network with exhibitors and other visitors alike.

Jerry Ramsdale, Fleet Show event director and publisher of Fleet World commented: “Our intention with this year’s Show is to provide fleet managers with as many good and valid reasons for a full day out of the office as possible.

“This year’s Show really does offer something for everyone with test driving, fleet seminars, the exhibition plus business networking. We believe it fully justifies a day out in a not-to-be missed opportunity,” he added.