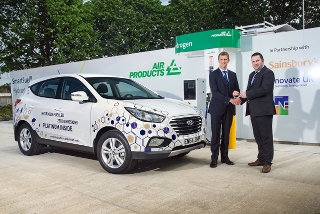 Headquartered in London, Anglo American will use its hydrogen-powered ix35 Fuel Cell for general business use and special events.

The handover took place at a brand new hydrogen refuelling station at Sainsbury’s supermarket in Hendon, which is the latest SmartFuel hydrogen fuelling facility to be built within the UK by Air Products.

The firm takes delivery of the vehicle just weeks after Hyundai Motor UK announced official pricing for the ix35 Fuel Cell – £53,105 OTR, which includes part-funding from the Europe-wide HyFive project. It also follows the announcement of the British Government’s £6.6m investment in the UK’s hydrogen infrastructure.

“As society adopts ever more challenging emissions targets, we expect the use of zero emissions Hydrogen Fuel Cell Electric Vehicles to increase significantly. We are actively supporting the development of this new technology, which will stimulate future demand for platinum, which is a key ingredient to this innovative vehicle technology,” said Andrew Hinkly, executive head of marketing, Anglo American Platinum.

Robin Hayles, sustainable fuel development manager, Hyundai UK, commented: “Anglo American is an important customer for Hyundai and one of the first outside of the hydrogen industry. The company understands the need to promote Fuel Cell as a viable alternative to internal combustion and increase the demand for this clean and sustainable technology.”