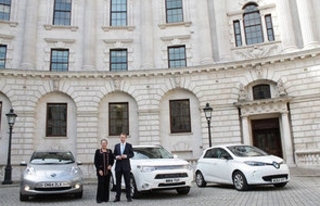 In total 140 ultra low-emission models will be deployed by 15 government departments and agencies, including the Foreign and Commonwealth Office, Ministry of Defence and the Home Office.

The fleet includes cars and vans used by government when transporting staff and equipment.

This announcement is intended to help encourage fleets to commit to greater take-up over the coming years with the funding to be used for take-up by the wider public sector – including councils, police forces and the NHS – of plug-in vehicles and to pay for charge-points to be installed to allow the vehicles to be charged at work.

Chief Secretary to the Treasury Danny Alexander added: “I have led the drive for electric cars and vans across government because – with much lower running costs and close to zero emissions – this is the right thing to do for both the environment and the taxpayer.

“This government is also investing significantly in ultra-low emission vehicles, and I recently launched a £10m battery prize for UK scientists to ensure that we are world-leading in this major new technology.”

The investment forms the latest part of a £500m package set aside for ULEV vehicles announced last year.