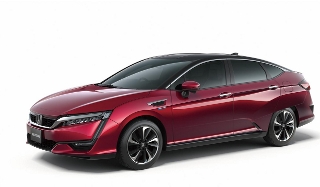 Part of the carmaker’s ‘The Power of Dreams’ line-up at the show, the new model is provisionally called the FCV and is billed as the world’s first production model of a fuel-cell powered saloon to house the entire fuel-cell powertrain in the space normally occupied by the engine and transmission.

No technical details were revealed but the carmaker said the model brings a cruising range of more than 700km (435mph).

It also added that the Japanese specification model can also act as a mobile power plant thanks to its external power feeding inverter. This enables it to generate and provide electricity to communities in the case of an emergency.

The Tokyo line-up will also see the Civic Type R make its Japanese debut at the show while concept models will include the Honda Project 2&4 powered by RC213V, which made its global debut at the Frankfurt Motor Show.