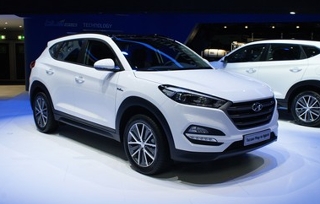 Alongside the world premiere of the new Tucson, the carmaker’s stand includes the Plug-in Hybrid Electric Vehicle (PHEV) concept, which uses a 114bhp 1.7-litre diesel engine with the new seven-speed dual-clutch transmission along with a 68bhp electric motor to drive the rear axle. The Tucson PHEV is also fitted with a 10.7 kWh lithium-ion polymer battery pack that can be fast charged in two and a half hours or five hours using a standard outlet.

The model is said to be able to travel over 50km in all-electric mode and has estimated CO2 emissions of less than 48g/km.

Also on the Hyundai stand is its 48V Hybrid Tucson concept, which uses a 48-volt lithium-ion battery and 14bhp electric motor. The system – said to especially suit larger cars and SUVs – costs a quarter of a full hybrid solution to build whilst boosting power by 10% and reducing emissions significantly, according to the carmaker.