Kia hints at fuel economy for hybrid and plug-in Optimas 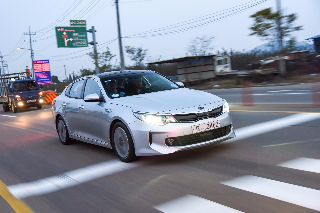 It’s unconfirmed as yet whether the Optima Hybrid will be available in right-hand drive markets this time, but Kia has said the new version will target a 10% improvement in fuel efficiency compared to its predecessor. That equates to around 63mpg with CO2 emissions of under 105g/km, despite the increase in power.

Packaging is better in the new version, too. The lithium-polymer battery pack is under the boot floor, which reduces the loss of cargo capacity and means the rear bench can be folded. Kia says the car will launch in Europe in early 2016 – it could offer a rival to the Ford Mondeo hybrid, which is offered in right-hand drive.

The Optima Plug-in Hybrid will follow later in the year. This uses the same 154bhp 2.0-litre petrol engine as the Optima Hybrid, but with a more powerful 67bhp motor and a much larger 9.8kWh lithium-polymer battery pack. A charging port on the wing can replenish the battery within three hours at a dedicated point.

Kia is targeting a 27-mile electric range and 48mpg fuel economy once the battery is depleted, which is over 120mpg and just over 50mpg on the combined cycle for plug-in hybrids. Final figures for both versions have not been confirmed, so early data is subject to change, and it's unclear whether the planned Optima estate will use either drivetrain.