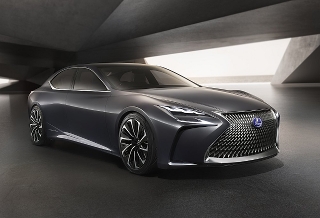 The LF-FC concept is 5.3 metres long – bigger than the current LS and is designed to look a little like a four-door coupe. There are four individual seats inside, and the dashboard features gesture-controlled functions with a holographic image floating above the centre console.

Notably, it’s also the strongest hint that Lexus could offer hydrogen fuel cell drivetrains alongside the hybrid technology used in the LS since 2008. Details are limited, but the LF-LC is said to feature a powerful rear-mounted fuel cell system, which drives the rear wheels. Two in-wheel motors at the front give it four-wheel drive.

The hydrogen tanks are fitted in a T formation in the transmission tunnel, with the power control unit for the drivetrain under the bonnet, which is said to benefit weight distribution.

Tokuo Fukuichi, Lexus International President, said: “Lexus wants to surprise and evoke emotion with its distinctive design and forward-thinking technology. For us, it is more than just a car; we want to exceed conventional imagination. The LF-FC expresses our progressive luxury and high-tech vision of a not-so-distant future.”