By Alex Grant / 5 years ago / New Cars / No Comments
With each small update to the LEAF range, Nissan’s spearhead EV has become a bit more… normal. That’s not a negative – what once could have looked like a leftfield choice is now a surprisingly versatile one, particularly with the second, larger battery option. 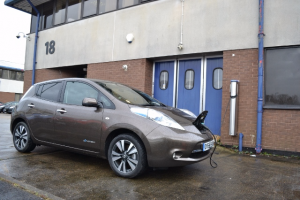 The 30kWh battery, launched late last year, is the most important upgrade yet. Think of it as a bigger fuel tank – 20% larger than the battery available since 2011, and thus theoretically capable of travelling 20% further, for a £1,600 outlay. Unsurprisingly, Nissan sees this as the bigger seller.

We’re looking to find out how much of a difference this makes to the way we can use the car. I’m no stranger to long-distance electric commuting, but I think the longer range will be enough to complete the 157-mile trek to the office with one charging stop instead of two. Nissan claims the larger capacity doesn’t affect rapid charging times.

Plus it’s well-timed, with our own Ensto charging point now installed at the Fleet World office. So it’ll be possible to use this for trips out of St Albans too, whether that’s into London or further afield. Jobs it should have no problems handling.