By Jonathan Musk / 1 year ago / International News / No Comments

Economies of scale are key to the future and success of car manufacturers producing electric vehicles, says Tom Lusher, an analyst at Cornwall Insight, but fleet adoption of EVs isn’t solely restricted by supply. 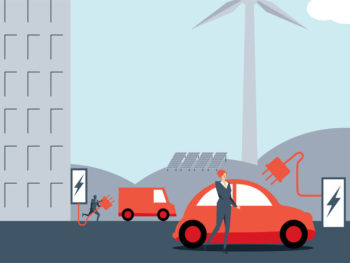 The latest research shown in Cornwall Insight’s Charged Up: Future Fleet shows the number of ventures is increasing

The latest research shown in Cornwall Insight’s Charged Up: Future Fleet shows that since December 2018, collaborations have been formed at an unprecedented pace in the automotive industry. Eight of the 13 major car manufacturers have either engaged or attempted to arrange a joint venture in that time, such as the recent failed proposition by Fiat Crysler Automobiles (FCA) to undertake a 50:50 partnership with Groupe Renault.

Tom Lusher analyst at Cornwall Insight, said: “The scale of collaboration between major automakers is unprecedented, indicating that consumer demand and regulation are placing a considerable amount of pressure on firms to develop electric transport.

“These partnerships have ramped-up over the past few months. To achieve their lower emission targets, EVs will need to be produced at scale. The alliances allow higher volumes of capital to be invested to help them obtain the necessary economies of scale to make the cost of EVs more attractive to customers.

“These projects’ investment and knowledge are predominately concentrated on research & development and the manufacturing of EVs. This is likely to see the supply of EVs to international markets begin to pick up in the early 2020s.

“Currently, fleets and domestic customers alike are struggling to purchase EVs and initiate a large-scale transition. These collaborations are likely to be a critical movement that works to remove this barrier in the years to come.”

However, on-going changes to electric vehicle infrastructure – for example following the UK Government’s recent Standardisation Recharging bill that will mandate contactless payment for EV charge points – helps encourage uptake of EVs by removing barriers to adoption that are commonly perceived to be problematic or inconvenient. This includes making charge networks no longer require membership, RFID cards or smartphone apps, as demonstrated by certain networks including Plug In Suffolk. This network, developed by EO Charging in partnership with energy supplier Bulb and Suffolk County Council, is claimed to be the UK’s first open charging network, which only requires a credit card for payment. Others, such as Shell Recharge, Ionity and Polar to name but a few are following suit.

For fleets reliant on fuel cards, Cornwall Insight says there’s still much work to be done, however. Collaboration and trials are on-going across the country, with one example being the Optimise Prime project, led by Hitachi and UKPN that is investigating the charging patterns of different types of fleet. One of these trials involves commercial vehicles that are charged at home, but its drivers are currently required to use fuel cards, for which there is no solution as yet to offer accurate reimbursement to employees for electricity used to ‘fuel’ EVs charged at home. Consequently, Cornwall Insight suggests fleet fuel cards could be used at charge points, but that there would need to be a standardised system in place for this to work.