By Natalie Middleton / 1 week ago / UK News / No Comments 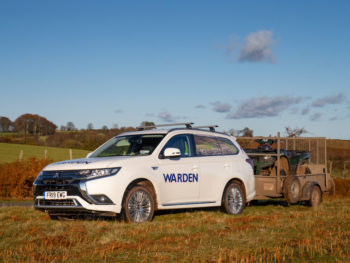 The new vehicle is being used by the warden team in charge of the maintenance and upkeep of the national park in southern Wales, which covers some 519 square miles; roughly 6.5% of the entire area of Wales.

The Mitsubishi Outlander PHEV Commercial – which has an electric-only range of 28 miles and the back-up of a petrol engine – is being put to the task with work including towing a quad bike to remote locations and lugging fence posts about and is often filled with essential equipment such as leaf blowers and chainsaws.

The Outlander PHEV Commercial forms the latest work by the national park authority to green its fleet; it’s already made significant progress in its plans to switch its pool car fleet to EVs and added solar panels to its facilities to power its expanding EV fleet.

The national park authority’s pioneering work has already seen it named as a ‘Go Ultra-Low Company’ three years ago while it was also Highly Commended in the Electric Vehicle Hero category at the Energy Saving Trust’s 2019 Fleet Heroes Awards.

And Kevin Booker, who manages the fleet at the organisation, was named the Financial Superstar at last week’s Great British Fleet Awards in recognition of his work to leverage cost savings throughout the organisation by electrifying the fleet.