Honda has confirmed at Frankfurt that its fourth-generation Jazz supermini will go hybrid only in Europe as it also announces more details on its energy management technologies in line with its ‘Electric Vision’. 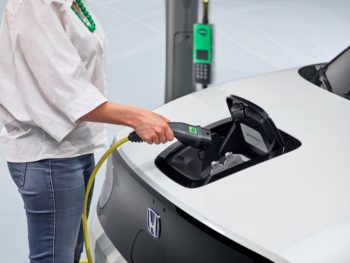 Honda’s first energy management services will be available from 2020, which will also see the launch of the Honda e

At this year’s Geneva Motor Show, the brand advanced its plans to electrify its range with the announcement that 100% of its European automobile sales will be “electrified” by 2025, accelerating the 2017 aim for two-thirds of its sales to be electrified by 2025. This follows previous announcements that it’s phasing out diesel. Geneva also saw Honda reveal the first details of its developing energy management solutions business for Europe and announce plans to team up with Moixa on V2G solutions and with on-street charging specialist Ubitricity.

Today’s opening of the Frankfurt Motor Show has built on this, not only with Honda’s reveal of the mass production version of the Honda e that was shown in prototype at Geneva, and the announcement of its pricing, but also with the confirmation by Honda Motor Europe senior vice president, Tom Gardner that the next-gen Jazz will be introduced into Europe with hybrid technology as the sole powertrain option.

Honda also outlined at Frankfurt how its technology could be used to support vehicle charging not only for users who have off-street parking, but also those who live in built up urban areas who only park on-street.

Honda’s work with Ubitricity has also led to a solution that allows users to charge in urban on-street scenarios. This technology allows the installation of chargepoints within lamp posts, while a bespoke cable featuring a mobile metering device allowing charging cost to be linked to the customer’s tariff to remove the need for subscription to several suppliers.

The brand also showed its Honda Power Manager Prototype ‘vehicle-to-grid’, which has been developed in partnership with bi-directional charging specialists EVTEC and will continue trials – including in London – ahead of future commercialisation in the early 2020s.

Honda also confirmed at Frankfurt that it will bring to market its first commercial energy services during 2020 to align with the launch of the Honda e. UK and Germany are targeted as the first countries for a commercial launch, with further European markets set to follow.