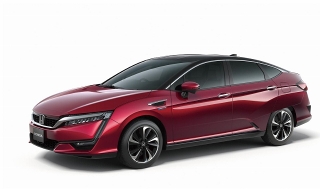 The Clarity Fuel Cell is said to be the world’s first hydrogen fuel cell car to package the fuel cell stack and the drivetrain in the space normally used by the engine and transmission – this is comparable in size to a V6 engine.

Not only does this mean there’s no compromise on interior space, but Honda has hinted in the past that it could enable the same system to be packaged in multiple bodystyles. Despite the reduction in size, the fuel cell stack has a higher energy density, and the motor is more powerful than the outgoing Clarity.

Honda is claiming a range of over 435 miles to a tank of hydrogen, which takes three minutes to refuel. It uses a high-pressure filling system – the same as the Mirai – which maximises range by enabling more hydrogen to be compressed into the tanks.

A launch date for the selected Euroepan markets hasn’t been confirmed yet, but the Clarity Fuel Cell is due to launch by the end of next year. Honda is one of five carmakers in the HyFIVE consortium and this will be part of a 110-vehicle pan-European fleet aimed at promoting the development, use and viability of hydrogen fuel cells.