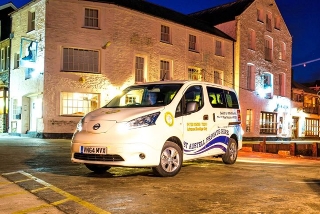 C&C Taxis, based in St Austell, already has a fleet of six Nissan LEAFs, and says each of its electric vehicles save around £10,000 in fuel bills per year. The newcomer was deployed earlier this month and has already clocked up 1,000 miles in the region.

Fleet manager, Mark Richards, said: ‘We’ve had such great success with our LEAFs we decided we were going to buy an e-NV200 the minute we learnt it was going to be launched.

‘Now we have one, we’re absolutely delighted with it. It does everything the LEAF does but is much bigger and offers more space. We’ll definitely be ordering more.’