Norwegian EV initiatives to continue until 2017 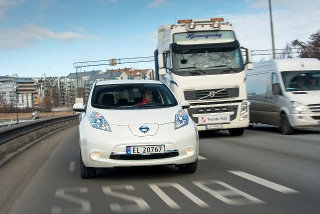 Norway has the largest per-capita electric vehicle ownership rate in the world, at 2% of the vehicle parc, having reached its 2018 target of 50,000 registrations during April this year. This popularity is helped by a raft of incentives for private and business users introduced to help meet a 40% CO2 reduction target by 2030.

Designed to give electric vehicles a financial advantage over petrol or diesel models, incentives include exemption from the purchase tax and 25% VAT, as well as road tolls and parking charges, plus a 50% discount on company car tax, doubling of mileage rates and access to public transport lanes and free public charging points. These were to be renewed after the 50,000-vehicle target had been achieved.

But the system has come under criticism, as the high take-up of electric vehicles in large cities has caused delays with public transport. Although financial incentives will remain, local authorities will be given new powers to set parking and charging fees and decide on public transport lane access over the next few years.

Changes in registration tax will be gradually introduced from 2016, with the aim of progressively weighting cost against vehicles with high CO2 output and recognising NOx emissions too. Electric vehicle discounts from the annual fee will also be gradually reduced, though not removed until the end of the decade, and a rights-based subsidy is being considered which could assess discounts based on the vehicle and owner.

While this is expected to reduce tax revenue, the government said it is planning not to suddenly ramp up costs for specific vehicles, instead saying it wants to continue to promote the use of “newer, safer and more environmentally friendly” models.