Citroën has revealed pricing and specs for its ë-Berlingo electric MPV, which is now available to order. 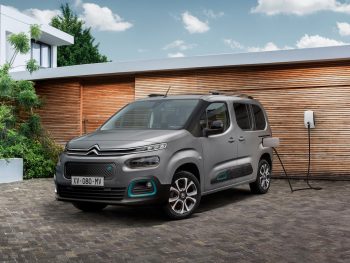 The Citroën ë-Berlingo electric MPV is available in both five- and seven-seat configurations, bringing a range of up to 174 miles

Priced from £29,575 (incl. Plug-in Car Grant) and aimed at both business and private users, it’s offered in both five- and seven-seat configurations, bringing a range of up to 174 miles.

It’s powered by the same electric motor and battery combination as the recently revealed ë-Berlingo van and the Peugeot e-Rifter and Vauxhall Combo-e Life MPVs.

This uses a 136hp electric motor connected up to a 50kWh battery pack. The ë-Berlingo also gets three drive modes to prioritise power or range as needed and a ‘B’ mode regenerative braking system, activated via the central console to maximise energy recovery during braking.

The ë-Berlingo comes as standard with a 7.4kW single-phase on-board charger and an optional 11kW three-phase charger. A full charge from a 7.4kW wallbox takes 7.5 hours while the 11kW charger can charge the ë-Berlingo in four hours 45 minutes using a bespoke wallbox. It also supports up to 100kW DC fast charging, giving an 80% charge in less than 30 minutes. Battery warranty stands at eight years or 100,000 miles.

Boot space ranges from 775 litres to 3,500 litres in M models – with the ability to carry items up to 2.7m in length – while the XL model increases this to 1,050 and 4,000 litres respectively and with a 3.05m maximum load length. All versions also feature sliding side doors.

Two trims are available: Feel and Flair XTR, with Feel models available as M or XL variants, while Flair XTR is sold exclusively in M length.