The new Renault Kangoo Van Z.E. 33 is now available to order, with prices starting from just over £14k. 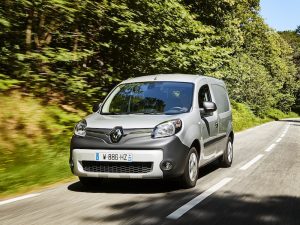 The latest Kangoo features a new 33kWh battery and R60 electric motor combo also seen in the new Master Z.E. The new battery features the same dimensions as the previous version and has been enhanced by improving the chemistry of the battery cells themselves in order to increase energy density, instead of adding extra modules.

In the case of the Kangoo Van, the new combination increases the NEDC cycle up to a claimed 160 miles, from 106 miles previously. However, Renault estimates this will fall to 124 miles in real-world driving conditions.

The latest Kangoo Van also comes with a new, more powerful charger, which reduces the time taken for a full charge to six hours, compared to eight hours for less range with the previous version, and an optional permanent eco mode (£150) that increases range up to 10% by modifying the throttle response and applying ECO engine maps whilst allowing drivers to access rapid acceleration when required.

Deliveries are due in UK showrooms from November 2017.