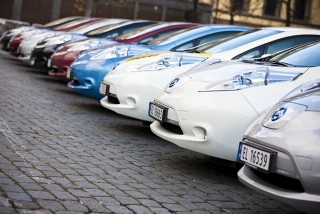 Formed of the Oslo Labour Party, the Green Party in Oslo and the Socialist Left Party after three weeks of negotiations, the new government will now serve a four-year term and begin plans to make the city a figurehead for sustainability in Europe.

Its plans include gradually phasing out petrol and diesel cars in favour of electric vehicles by the end of the next decade, encouraged by introducing low and zero emission zones within the Ring 3 road and variable tolls to recognise alternative drivetrains and traffic flow.

A network of fast charging points and hydrogen and biofuel vehicles will also be rolled out, and the government will work with taxi fleets in Oslo to help them switch to electric cars by the end of its four-year term. Shore-supplied power will be provided to docked ships to reduce pollution from the harbour.

It’s hoped that these measures will enable easier use of public transport, walking and cycling by improving air quality, as well as furthering Norway’s already strong electric vehicle market.

The Green Party’s Lan Marie Nguyen Berg said: “We have a few years on us to reduce greenhouse gas emissions and avoid dangerous climate change. We are very pleased to enter a city council that will enable the city to a fossil-free city in fourteen years.

“We'll make it a lot better to ride in Oslo, and the city will be car free during the council period. For the first time Oslo a city council that will reduce car traffic. These are concrete measures that will enable the city to a greener and better city to live in.”