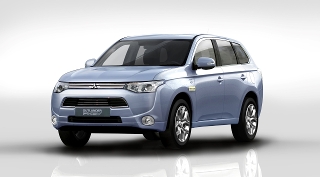 Analysis of DVLA data by the RAC Foundation has revealed that sales of plug-in vehicles eligible for the Government’s plug-in car and van grants rose 37% in Q1 2015 compared to Q4 2014, reaching a total of 29,469 vehicles. With the total UK vehicle parc comprising 30.7m cars and 3.6m vans, this means that vehicles licensed and eligible for the plug-in car and van grants make up 0.09% of the total: 1 in every 1,164.

The research showed that the Mitsubishi Outlander PHEV is now the most common plug-in vehicle on the road in the UK, knocking the Nissan LEAF off the top spot.

By comparison there were 8,274 pure battery-powered Nissan Leafs, a 21% increase on the 6,838 figure three months earlier.

Third in the list of licensed vehicles that qualify for the government’s plug-in car and van grants is the BMW i3 with 2,186 units, up 43%.

Top 20 vehicles on the road currently available under the plug-in car grant scheme (as of the end of Q1 2015):