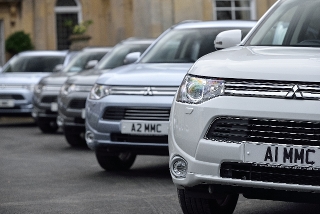 A total of 2,838 ULEVs were registered between January and May 2014, calculated based on their eligibility for the Plug-in Car Grant, which offers £5,000 or up to 25% off the purchase price.

Within that, plug-in hybrid and range-extenders recorded the largest increase, accounting for the majority of the total. In the first five months of 2015, 8,147 were registered in the UK – a 766% increase on 2014, led by the popularity of the Mitsubishi Outlander PHEV.

Plug-in hybrids and range extenders accounted for 69% of the total ULEV registrations for the year to date, compared with 33% during 2014. This is despite pure electric vehicle registrations doubling, from 1,897 units to 3,772, during the same period.

Mike Hawes, SMMT Chief Executive, said: "The remarkable growth in demand for plug-in vehicles is expected to continue as the range of ultra-low emission vehicles on sale increases. Meanwhile, we anticipate a natural levelling out of the overall new car market throughout the remainder of 2015.”