Plug-in hybrids now account for a fifth of of Range Rover and Range Rover Sport orders in the UK, but Jaguar Land Rover UK managing director, Jeremy Hicks, is calling for a more balanced discussion around future drivetrain choices to avoid drivers picking the wrong options. 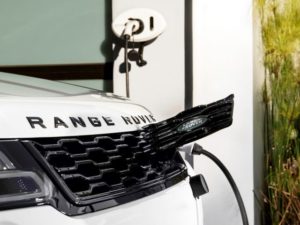 One in five Range Rover customers are opting for the PHEV.

The P400e, a petrol plug-in hybrid drivetrain, indirectly replaced the niche-volume diesel hybrid as part of a mid-life refresh for both Range Rover models, producing 398bhp with CO2 emissions of 64g/km. It’s a technology that’s likely to be shared with other models, part of a suite of electrified drivetrains, from mild hybrids to fully electric, which will be offered across the two brands.

Demand for the P400e has outstripped expectations, Hicks said, across fleet and retail channels. In part that’s due to the towing-friendly electric motor torque that makes the technology well-suited to SUVs, he explained. In turn, it’s meant they have become an alternative to large diesels, regardless of tax advantages.

But, he stressed, debates around petrol, diesel and alternative drivetrains need more balance. Jaguar Land Rover saw flat demand for diesel engines last year, with the fuel falling from a 90% share of the two brands’ volumes to 80% in recent months. Hicks said media coverage and “arbitrary” tax penalties against diesel engines ignored their still important 15-20% CO2 advantage, and that the latest units emit similar amounts of NOx to petrol engines.

“We’ve improved CO2 by 25% in the last ten years, and NOx by 84% in the last ten years,” he explained. “They’re so much better, so there’s loads of scope for combustion engines. I think it’s important to have a balance; we don’t want to get carried away, that the world’s electrifying, and that’s going to be it, and there won’t be anything else. I don’t buy that.

“We can’t have a position like last year where the CO2 from the fleet of cars went up, after years of going down. There’s no surprise in that; it’s because petrol sales have gone up. We’ve got to do the right thing for the environment, and I’m concerned that we’re not. The debate is completely out of balance. We’ve got to make sure customers are buying the right car for them. That’s my main motivation.”

Previous: Seat hints at high-performance Cupra PHEVs
Next: Opinion: What can the UK learn from Norway’s eco-friendly car boom?