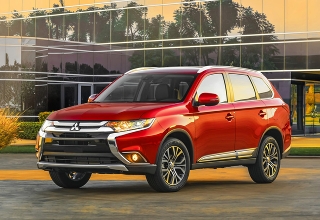 Revealed at the New York International Auto Show in March, Mitsubishi has confirmed full details for the Japanese market – the first to get the car.

These include upgrades for the hybrid system, with a slight increase in electric range and improved fuel economy on the Japanese JC08 test cycle, as well as improvements to acceleration from a standing start. There are no figures for the European NEDC test cycle yet.

Behind a re-styled front end which reflects the aggressive new design previewed in recent concept cars, the Outlander PHEV gets interior revisions including new seats and trim, a new four-spoke steering wheel with silver controls and accent stitching on the instrument binnacle.

The body is stiffer and features additional sound-absorbing material, while structural changes are designed to make the doors feel weightier when closing – in line with the premium SUVs which are available at a similar price point. Steering feel and suspension comfort have been re-tuned for the new car, and over 30 measures have been taken to reduce engine, tyre and wind noise.

Already a popular car with fleets, the Mitsubishi Outlander PHEV is the UK's biggest-selling ultra-low emission vehicle (ULEV) and a large part of the 766% year-on-year increase in plug-in hybrid sales – to 8,147 units – in the first quarter of 2015.