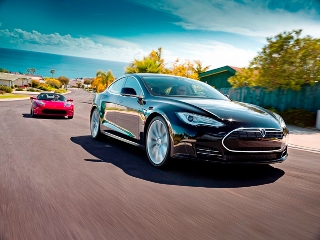 Owners of the Roadster, Tesla’s first production car launched in 2008, will be offered an upgrade package based on knowledge gained from the Model S, claimed to increase the range to around 400 miles on one charge.

The Roadster 3.0 package comprises a 70kWh battery, 31% higher in capacity than the original but slotted into the same space, as well as an aerodynamic bodykit and reductions in rolling resistance for the tyres, brakes and wheel bearings. Tesla is aiming to demonstrate the range with a non-stop drive from San Francisco to Los Angeles later this month.

For the Model S, Tesla is focusing on charging. Co-founder and CEO, Elon Musk, tweeted to say the company is developing a charging cable which reaches out to find the car ‘like a solid metal snake’ – though there is no specific timeframe for this technology as yet.

In the meantime, the electric luxury saloon will be used to test battery swap technology. It’s a process Tesla has demonstrated in the past, allowing the Model S to get a fully charged battery in a comparable time to filling a fuel tank.

A small trial is now underway, with a swap station open in Harris Ranch, California. This can remove and replace the Model S battery with a fully charged unit in three minutes, costing just less than a tank of petrol in an equivalent-sized vehicle. Tesla says increased automation and alterations to the Model S could bring this down to one minute.

For now, the trial will assess whether there’s enough demand for battery swaps to make further investment worthwhile. The company also offers a network of Superchargers, which can recharge the Model S to 80% in around half an hour, across the United States. Supercharging is an option, but enables owners to charge for free, for life.