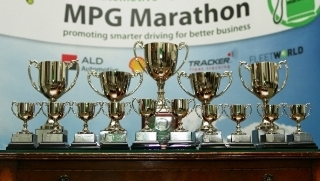 Sponsored by The RAC, ALD Automotive and TRACKER, the event is open to all production cars and commercial vehicles, and challenges competitors to find the most efficient route between set checkpoints over the two-day, 300-mile plus event.

This ‘scatter gun’ approach of competitors finding their own route was introduced at the 2014 MPG Marathon, and provided a very interesting set of results. Vehicles are monitored using TRACKER technology in real-time to verify the routes taken. Prior to the 2014 event, competitors were required to follow a standardised route, but the response to the introduction of the new approach was so positive it has been carried forward to the 2015 MPG Marathon.

The 2014 line-up also included the first entrants into a growing category of electric entrants, competing to use as little energy as possible while covering the same distance as their petrol and diesel counterparts. Category winners Jerry Clist and co-driver Peter Thompson’s performance in a Nissan LEAF equated to an astonishing 249mpg in a comparable diesel car, at a cost of just 2.6p per mile.

With fuel prices once again on the rise and unstable rates representing a substantial cost for private drivers and businesses, the MPG Marathon regularly attracts a high level of media interest. The BBC has covered four of the last five years and, with many motoring journalists competing, it generates extensive coverage across print, digital and broadcast formats.

Registration for the 2015 MPG Marathon is now open, with many former competitors, including BBC South correspondent Paul Clifton, returning to take up the challenge. For more information, visit www.mpgmarathon.co.uk.