Renault’s Arkana hybrid SUV has opened for pre-orders, priced from £25,300. 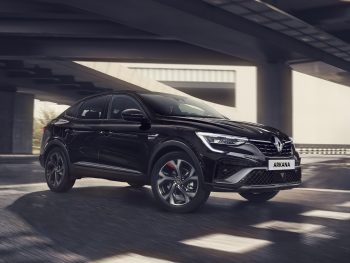 The coupé-crossover is Renault’s first purpose-built hybrid model and was first revealed at the Moscow International Motor Show in 2018, initially focused on Russia and other markets. Renault then confirmed last year that it would launch the Arkana in the UK and Europe.

It joins Renault’s crossover line-up alongside the Captur and Kadjar and is focused on providing SUV practicality with coupé-focused design and an electrified engine line-up.

Built on the Renault-Nissan-Mitsubishi Alliance’s CMF-B modular platform also used for the Clio and Captur, the Arkana is slightly longer than the Mégane hatchback but brings boot space of 513 litres or 480 litres on the full hybrid.

Engine line-up includes a range of petrol mild and full hybrids. The E-Tech full hybrid, priced from £26,300, teams up a 1.6-litre petrol engine and two electric motors along with a 1.2 kWh lithium-ion battery. This provides 145hp of power and a combined 398Nm of torque. It will emit from 111g/km of CO2 with fuel economy up to 57.6mpg.

The top-spec RS Line brings similar design features to other Renault RS Line variants including double chromed tailpipes and 18-inch grey and black diamond-cut alloy wheels, along with interior upgrades such as aluminium pedals. RS Line models also get Easy Park Assist, capable of parking the car in a range of different scenarios.

First deliveries are expected to start from September.