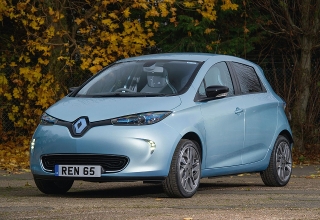 With the R240 motor, named after its range in kilometres, the ZOE offers a class-leading 149-mile range from a single charge, based on the New European Drive Cycle, thanks to improved electronic management, and it’s also smaller than the unit it replaces. It's expected that this will account for the bulk of sales.

However, unlike the cars offered to date, the ZOE R240 cannot be rapid charged to 80% capacity in half an hour. Its maximum charging rate is 22kW, which means it takes about an hour to reach an 80% charge, but the Chameleon charging system has been reconfigured to offer faster top-ups from a domestic socket. The ZOE offered to date had been designed for bespoke charging points, but was slow to top up from a three-pin plug.

Renault says this enables customers to choose between having extra range for day-to-day use, or the ability to cover long distances via the UK’s growing network of rapid chargers. ZOEs with rapid charging still use the older motor, which offers an official range of 130 miles, and are priced at £500 extra.

The carmaker is claiming a real-world range of between 64 and 93 miles for the rapid charge version, compared to between 71 and 106 miles for the R240. Both cars offer identical on-road performance, and retail customers can claim a 7kW home wallbox, partially funded by Renault.

Alongside the new motor, Renault has aligned the ZOE with the rest of its range. The Dynamique Zen and Dynamique Intens are replaced by a single Dynamique Nav version, while the Expression version is named Expression Nav. Pricing starts at £13,445 after the Plug-in Car Grant, and rapid charging is only offered on the Dynamique Nav, which is priced from £15,045. ZOE i versions, which enable customers to own rather than separately lease the battery, are also available.

The same trim structure is also now offered on the Twizy electric quadricycle, but with a single-seat Cargo version also available.